Something of a fantasy themed month, as I’ve painted pretty much completed two Factions with which to playtest Mantic’s upcoming Vanguard game. Plus a first faction for Games Workshop’s Shadespire boardgame/wargame/LCG. 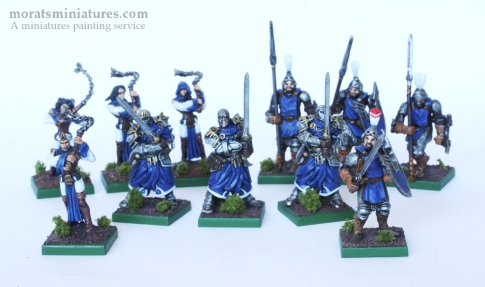 I already had plenty of Basileans from the first Kings of War Kickstarter. They were a bit of a disappointment to most people as the Kickstarter’s success forced them to go elsewhere to get molds tooled and their first choice turned out to be unwise. The plastics had disappointingly soft detail as well as being poorly sculpted in some areas the early PVC stuff too also suffered from some odd proportions, although the detail was sharp and moldlines were easier to remove than on their later PVC efforts. Distortions were a big thing though with none of the PVC models (all but the Men-at-Arms with spears in the big group photo above) going together without generous application of the hairdryer. My later experimentations with my Bitzbox to make the War Wizard and crossbows have got me thinking I could probably use some spare High Elf parts to fix some of the glaring issues on the Men-at-Arms. That said all of the above is being replaced when Vanguard is eventually released anyway so does it really matter?

Orcs on the other hand are not part of the initial Vanguard releases so these chaps are a lot more future proofed. As such I’ve put a lot more effort into them. They’re a mix of The plastics for Kings of War and some re-based figures from the Dungeon Saga range. They seem to draw mixed opinions as miniatures, but they remind me of late eighties/early nineties Games Workshop sculpts (although they’re better detailed than that) and that to me is a good thing. Gone for a nice contrasty blue on the clothes as I think red on orcs is overdone and that yellow GW is doing on their recent orcs is bloody horrible! Still one more to go on these guys as they need a leader shouldn’t be long now.

Which brings us to the above and the first GW figures I’ve painted for myself in a few years. Shadespire seems to be doing pretty well at my local club and it’s drastically different to Vanguard in nearly every way. I’d abandoned ship well before Age of Sigmar killed off a lot of people’s interest in Workshop (in their fantasy range at least). They’re doing much better on the whole now and this game is still pretty well balanced 8 factions and a year in and most surprising of all the pricing is really very reasonable. Expect a comprehensive review once I’ve actually played the thing.