Vanguard orcs ready for the table now after some hefty sidetracking (both painting and gaming) with Shadespire. We’ll have to see how they perform now they’ve had another (much needed) balancing pass. I really should find a way to up this to a full Kings of War army, but having to build custom movement trays will probably make it a job I put off essentially indefinitely.

Two more warbands painted for Shadespire. Steelheart’s Champions were already underway last post. They’re quite nice figures even if I don’t like what they stand for (having Space Marines in Fantasy). 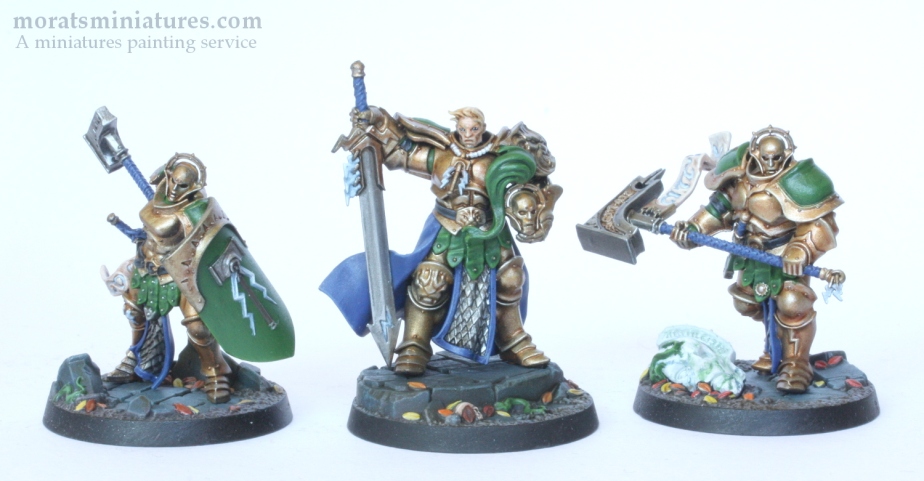 Also remember I said I hate the Age of Sigmar orcs in yellow? Guess which colour I painted some Shadespire Orcs? 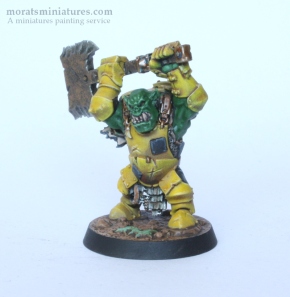 In short I think their yellow is far too bright. Also I wanted to try a strong airbrush zenithal highlight and colour modulation technique and these fellas get to be guinea pigs. Reasonably satisfied with the result, though I’m not sure what the colour modulation step (basecoat in pink then glaze with yellow) really brings to the table.

Shadespire does seem like a great game for painting then ebaying painted warbands. I’ve now got some Skaven on the table which I’ll do for that purpose specifically and we’ll see if they sell.

Next up those and I’ll do a proper Shadespire review as a separate article If the Citadel Air review metrics are anything to go by that’s the biggest draw for the blog!

Something of a fantasy themed month, as I’ve painted pretty much completed two Factions with which to playtest Mantic’s upcoming Vanguard game. Plus a first faction for Games Workshop’s Shadespire boardgame/wargame/LCG.

I already had plenty of Basileans from the first Kings of War Kickstarter. They were a bit of a disappointment to most people as the Kickstarter’s success forced them to go elsewhere to get molds tooled and their first choice turned out to be unwise. The plastics had disappointingly soft detail as well as being poorly sculpted in some areas the early PVC stuff too also suffered from some odd proportions, although the detail was sharp and moldlines were easier to remove than on their later PVC efforts. Distortions were a big thing though with none of the PVC models (all but the Men-at-Arms with spears in the big group photo above) going together without generous application of the hairdryer. My later experimentations with my Bitzbox to make the War Wizard and crossbows have got me thinking I could probably use some spare High Elf parts to fix some of the glaring issues on the Men-at-Arms. That said all of the above is being replaced when Vanguard is eventually released anyway so does it really matter?

Orcs on the other hand are not part of the initial Vanguard releases so these chaps are a lot more future proofed. As such I’ve put a lot more effort into them. They’re a mix of The plastics for Kings of War and some re-based figures from the Dungeon Saga range. They seem to draw mixed opinions as miniatures, but they remind me of late eighties/early nineties Games Workshop sculpts (although they’re better detailed than that) and that to me is a good thing. Gone for a nice contrasty blue on the clothes as I think red on orcs is overdone and that yellow GW is doing on their recent orcs is bloody horrible! Still one more to go on these guys as they need a leader shouldn’t be long now.

Which brings us to the above and the first GW figures I’ve painted for myself in a few years. Shadespire seems to be doing pretty well at my local club and it’s drastically different to Vanguard in nearly every way. I’d abandoned ship well before Age of Sigmar killed off a lot of people’s interest in Workshop (in their fantasy range at least). They’re doing much better on the whole now and this game is still pretty well balanced 8 factions and a year in and most surprising of all the pricing is really very reasonable. Expect a comprehensive review once I’ve actually played the thing.

Bit of a change of pace and subject matter from the norm with some thoughts on the universe of Mantic’s Deadzone:

So Enforcers, everyone’s favorite faceless, emotionless, amoral, asset amelioration solution.
Some would call them inhuman, but is that actually true?
Are they, perhaps, Cyborgs?
Well I know what you’re thinking, obviously Pathfinders are human(ish). Hard to argue against that, but their battlefield role demands they operate well outside supply lines where power outlets for armour (or indeed a big clanky mechanical body) aren’t going to be reliably available.
Perhaps the Pathfinder role is the first job an Enforcer takes on before being uploaded into armour.
We know they don’t seem to retire, (at least not in public) and only officers ever show their “faces” (perhaps a robocop style appliance). Forcing open an Enforcer armour suit reveals only dust inside the articulated plates as the internals (be they human or biomechanical) are scuttled.
The proportions on Enforcers are suspect in a number of ways. The Knee joints seem barely sufficient to fit a leg into (impossible in the case of the “early” Mks of Enforcer armour). The heads too seem very small, perhaps just possible to squeeze a human head into, but leaving little actual armour on what’s perhaps the critical point. The arms are very long and this is taken to the greatest extreme with Peacekeeper armour. They’re incredibly broad of shoulder (far more so than the already super buff Pathfinders) yet the arms are still very nearly down to the knees if straightened as well as being pretty spindly. If there is a human in there, their arms are not in the suits arms.
This hypothesis would also explain why there appears to be female Pathfinders but no female Enforcers or Peacekeepers
Lt Commander Roca is sticking point for this hypothesis, however he’s a Forward Observer and that armour has much more substantial knees and a bigger helm that does look like it could contain a human.
There’s another possibility beyond surgical brain extraction and artificial bodies. Perhaps Enforcers are closer to Asterian Cyphers (or probably more likely Marionettes). Thus any Enforcer can fight as a Pathfinder when required or be wired up in orbit and connect to an Enforcer suit planetside.
So what do we think? Is this a conspiracy? A cover up? Are humanities finest warriors not human at all? I think we should be told.

Another Warmaster commission complete. I recall Lizards were one of the final armies to be released for Warmaster (mere months before it fell off the store’s shelves I think). As such they’re probably some of the nicest sculpts of the lot, with the characters being particularly fine.

Also been involving myself with Warmaster’s upcoming “Vanguard” fantasy skirmish game. Can’t get into too many rules details  as I’ve signed an NDA. That said as with most Mantic sytems, huge amounts are in the public domain already including a working version of the rules for those interested: Vanguard Beta

I could be playtesting with my Elves which never really got to a decent size for Kings of War despite my holding that system in high regard. That of course makes too much sense, so I’ve started painting some orcs instead. 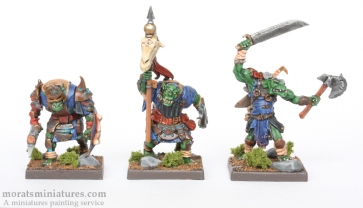 Looks like a force for Vanguard is between 8-16 models, so getting that done should be pretty straightforward. I may make some custom movement trays for them to use in Kings of War, this time I’ll make scenic trays so I can take full use of the “use less than 10 models to count as 10 models” rules. Pretty sure 6 orcs on a scenic tray will pass for 10 packed tight together, will better suit their bestial nature regardless.

Well an new year and a lengthy time away from the blog. Blitzed out a Warmaster Chaos Dwarf army in early December, but finished it so quickly it was out the door before I got a chance to photograph any of it. Nice Polar Fox figures too.

After that and up to my Christmas painting free period (actually I painted some Dreadball, but more of that later) I painted the core set for Rumbleslam.

Nice characterful resin figures these. Nice and sharply incised detail. mold lines were significant, but they were very easy to scrape clean. Sparse on extraneous detail though, perhaps understandable in their sport of choice.

So a bit of Dreadball, delivering the very opposite experience mold line wise. Fine mold lines that are an absolute nightmare to get off. Once again making me glad I don’t push on with my KoW Elves as that requires perhaps 40 figures worth of cleaning! Nice figures eventually, still have the somewhat more straightforward strikers (less complicated armour) still to go.

Still struggling to find a decent predictable varnish (all the above were done with the same can of so called matt). Having acquired an ultrasonic cleaner and a respirator at Christmas I might start using airbrush varnish instead.