As promised the Veteran Mist figure all done. Much nicer than the standard (and bears absolutely no visual relationship to the original in pose or design). A great deal less breakable too. 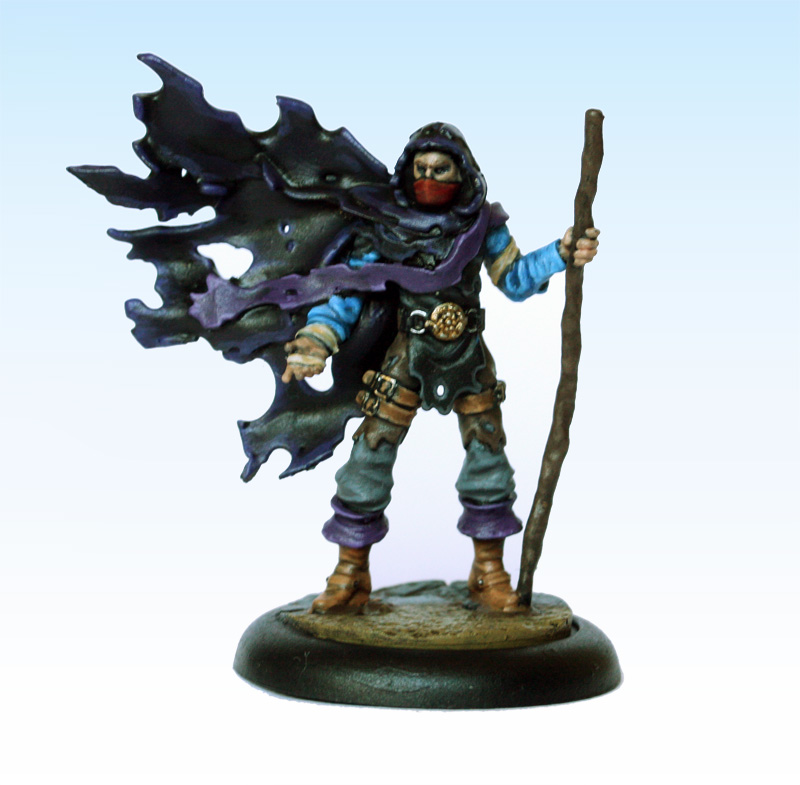 Also for those who like games about gladiators we have the figures from Gale Force (‘s Spartacus board game. These were some kind of soft PVC material with a smell evocative to several eighties toys. Battle Beasts anyone? No? Just me then.

The ones that came with the base game (gathered together below) are really pretty basic with soft detail. The ones from the supplements in the bottom picture are much sharper and generally nicer figures. All needed a bit of the hairdryer treatment to straighten out bent weapons a bit.

Coming up soon we’ll have one of the Dungeon Saga supplements done (not sure if it’ll be the Warlord of Galahir (Orcs), or Infernal Crypts (Abyssals). Also still more Warmaster in the form of a Bretonnian army.

One set of Space Hulk terminators done and dusted. Nice figures on the whole, though I think the compromises to make them simple “board game” figures went a bit far in a few places with cables springing out of odd locations on mold join lines. Still nice to paint Space Marines again as it’s been a few years since I painted a loyalist one. 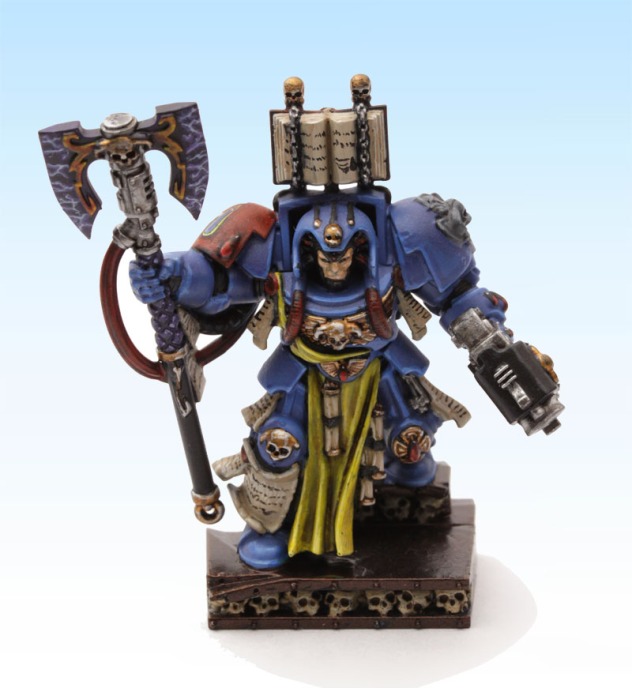 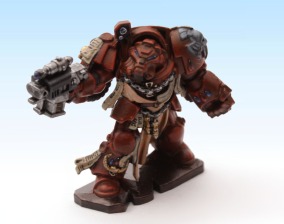 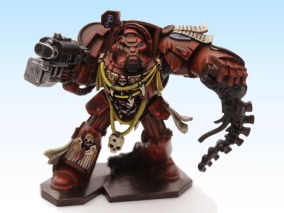 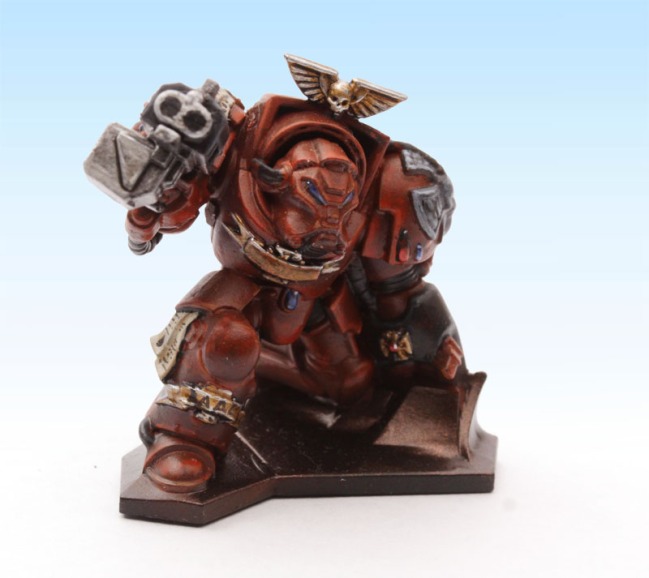 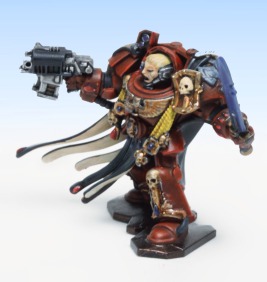 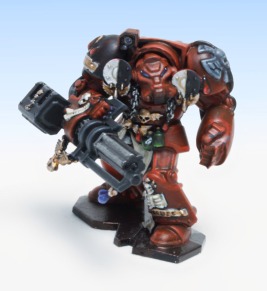 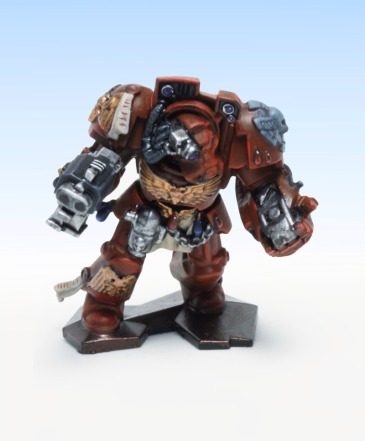 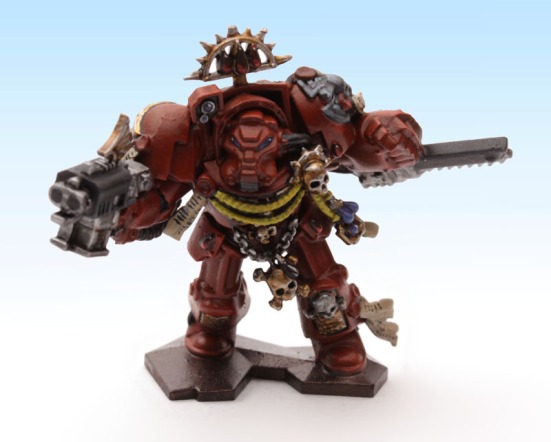 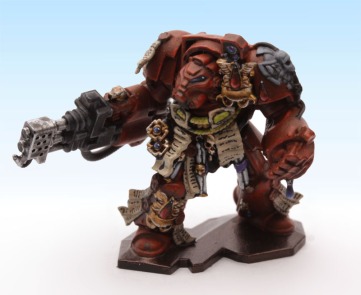 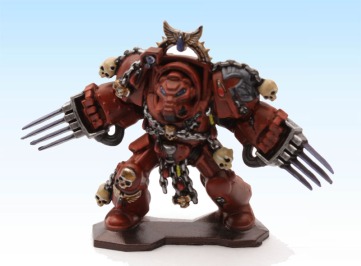 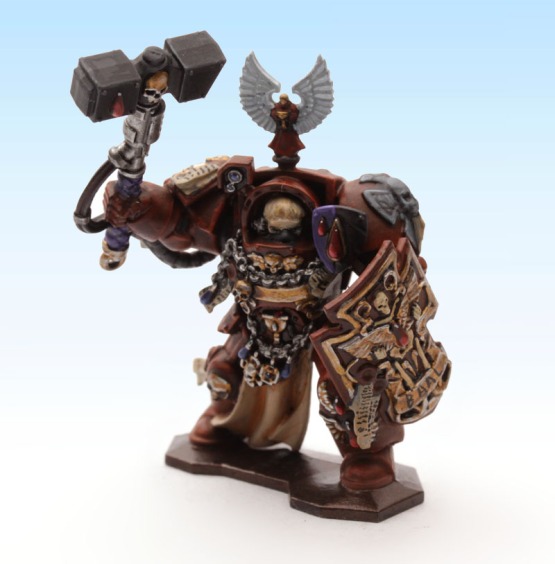 I’ve also managed to get the required stuff done to bulk my Deadzone Enforcers out sufficiently to field them as a (small) Warpath: Firefight army. They’re a rather different project, as I’ve adopted some techniques from military modelers, not usually deployed on sci-fi wargame figures.

Several of this batch were from Mantic’s “Dark Days of Restic” period. I found them to be a real mixed bag. The captain (aside from an egregious mold line across the the inset folds of his cloak) came out pretty well, the Assault Enforcer in the leaping pose was mostly OK and the engineer was pretty grim. 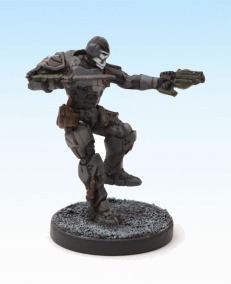 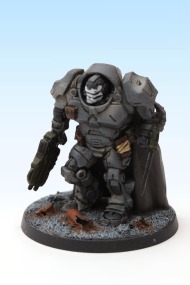 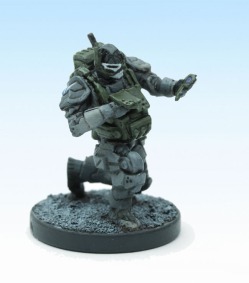 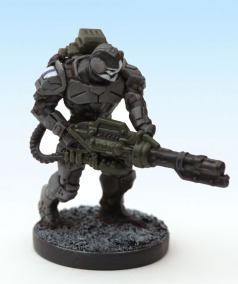 I’ve got 2 more specialists to do for the Deadzone version, then I shall turn myself to getting my Plague “Warpathable “to match.

Next contracts are a full set of the Spartacus miniatures (“Do you like games about Gladiators?) A couple of bonus Vampire Count Skeleton units for Warmaster, apparently six regiments just isn’t enough! Also a new Guildball Union figure has dropped so I’ll get him done too.

Vampire Count Warmaster finally put to bed, Been a bit quiet of late as a hard drive failure has made getting photos up a little harder. Also stopped me from checking my work so a fair few photos of the Vampire Counts were unsalvagable!

Still first up we have some Ethereal Host Possibly the simplest paint job of any unit ever, looks pretty impactful on the table though.

Then we have some Ghouls: 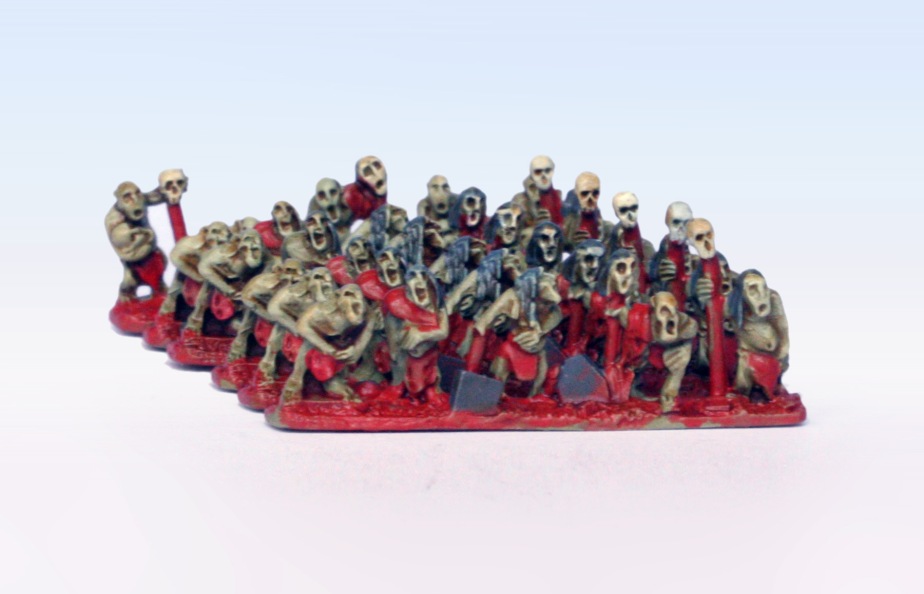 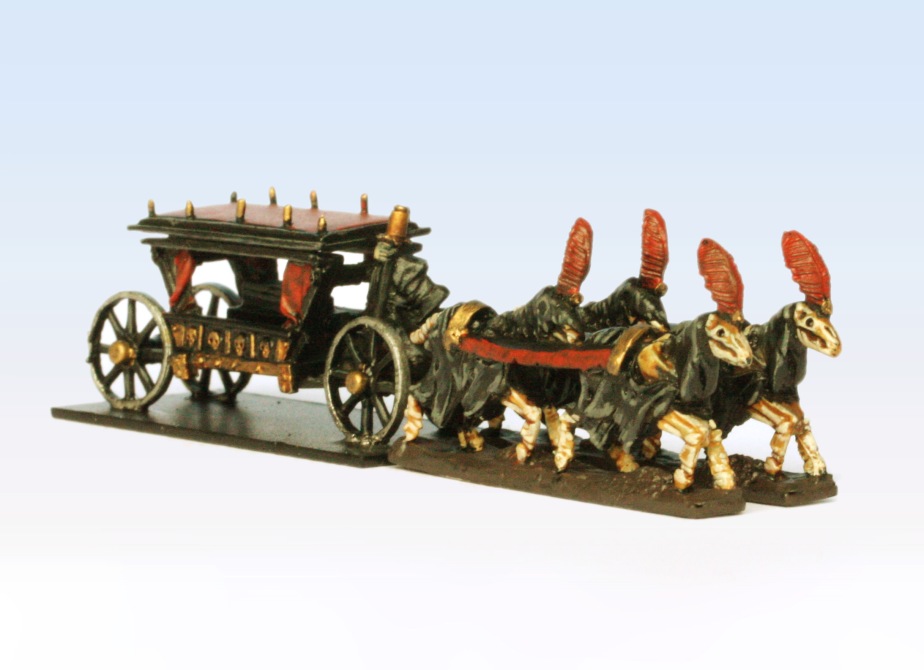 And lastly a scattering of characters. 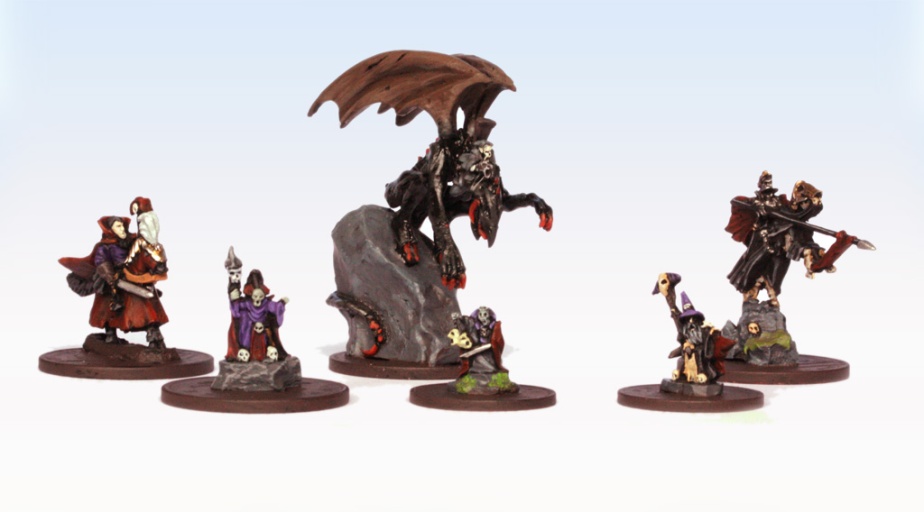 Hopefully these’ll be gracing a table from the nice chaps at The Warmaster Podcast sometime soon.

Also in this period I’ve base painted an Imperial Guard Hellhound for a client who will be weathering it. Once that’s done I’ll see if I can swing a picture here.

Now underway we have some Space Hulk. Just the Terminators to do.

Just the one complete so far the lovely Dead Terminator. Here’s a few piccies: 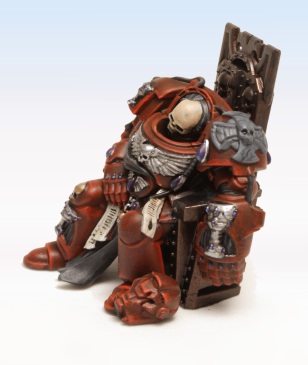 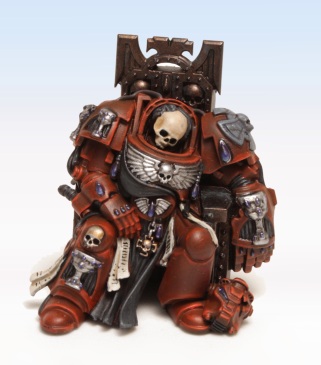 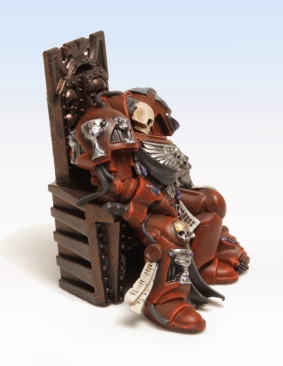 Back from a French getaway with some relaxing painting of lovely models in a rather more pleasant environment than the norm, weather was certainly improved.

Only problem with rural France is you’re in trouble if you’re stupid enough to accidentally bring some gloss paints with you. Managed to find a couple of good stockists out there. Both Trole de Joux in Chateroux and GalahaD in Bourges had an excellent range of miniature paints.

Not tried Prince August paints before (don’t seem to be a thing in the UK) they seemed the equal of Vallejo game colour range. Picked up one of their brushes too, one of the best I’ve bought. Shame I had to abandon it in France really, but was worried enough about French airline security and metal figures in my hand luggage (not a problem it seems).

So here we have the second half of the Guildball Union team: 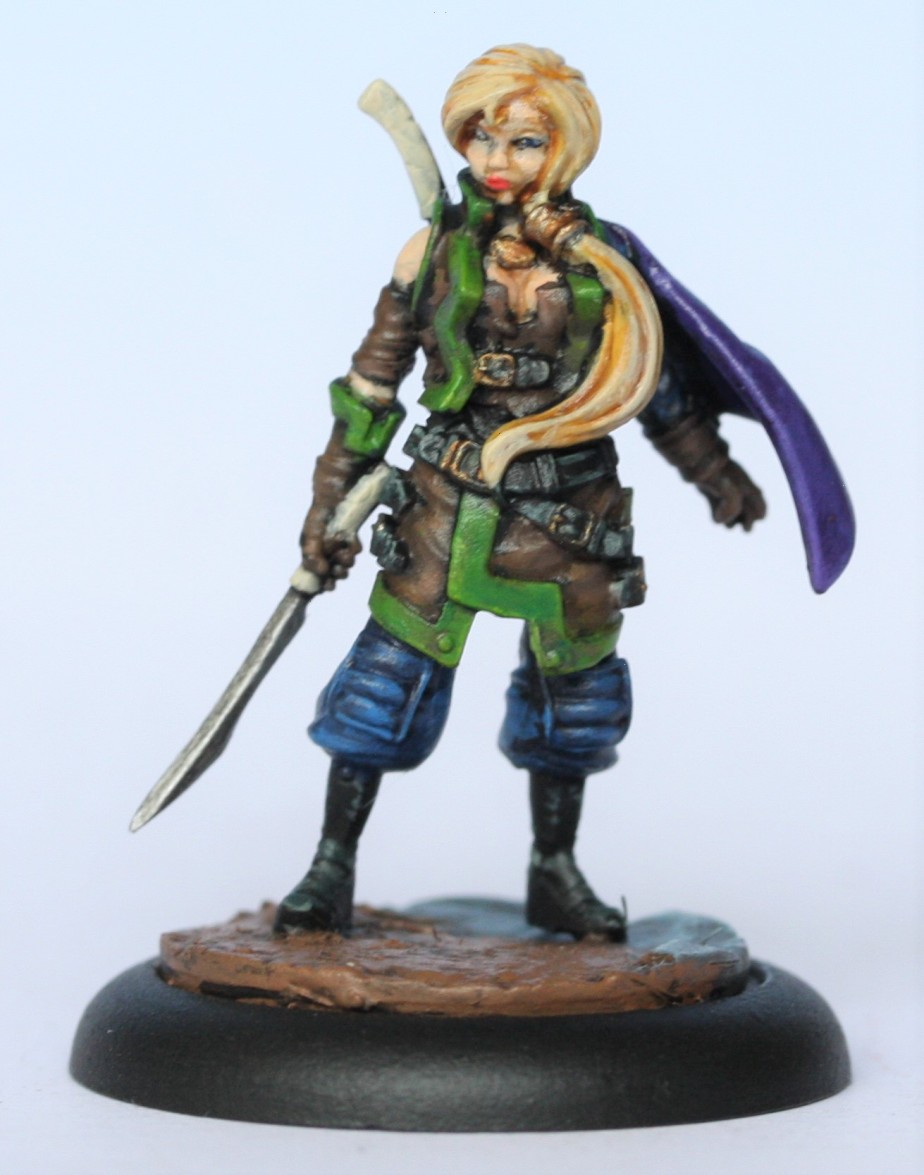 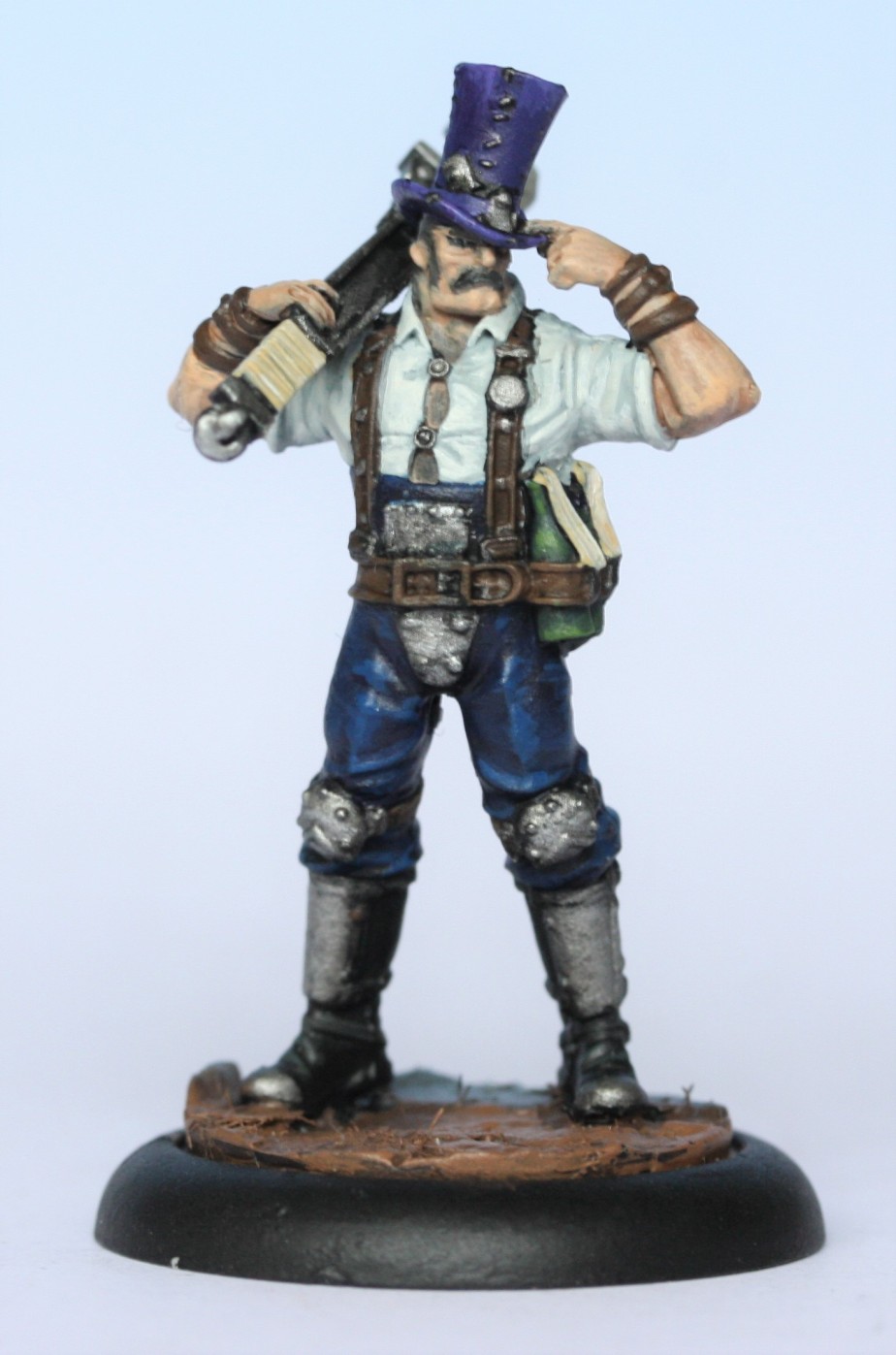 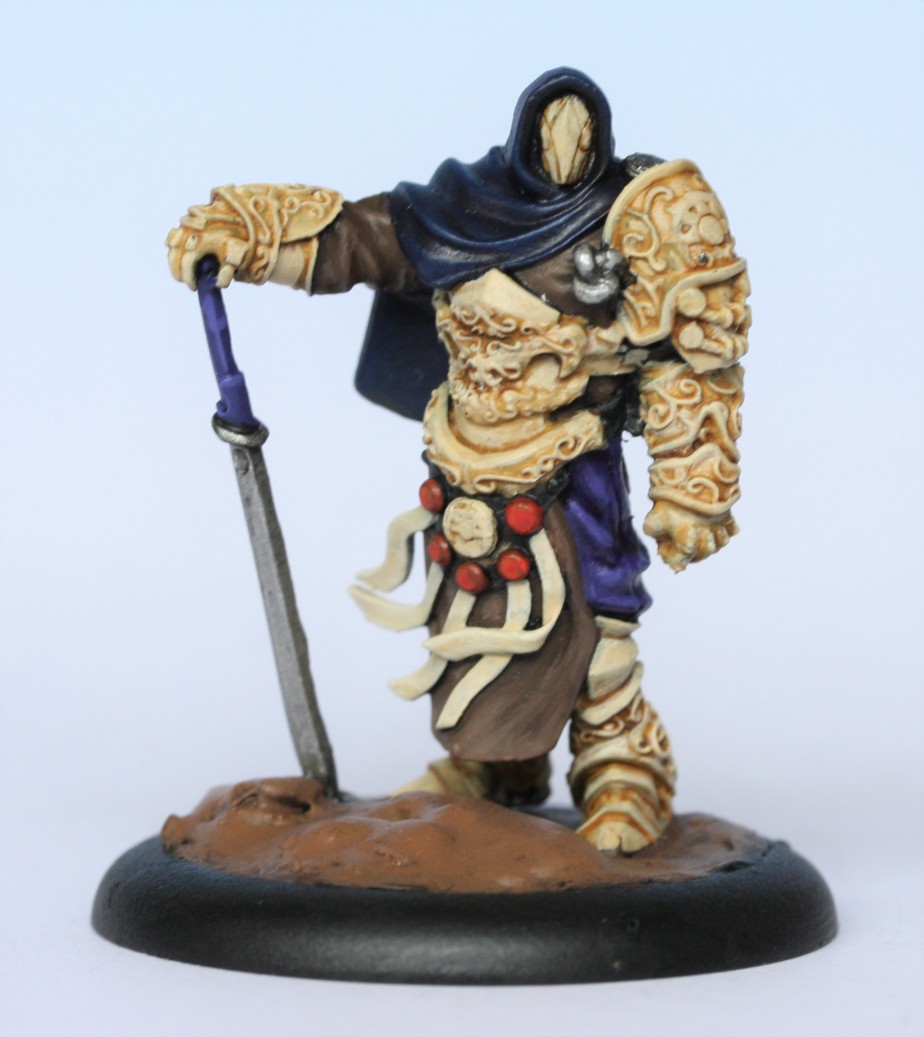 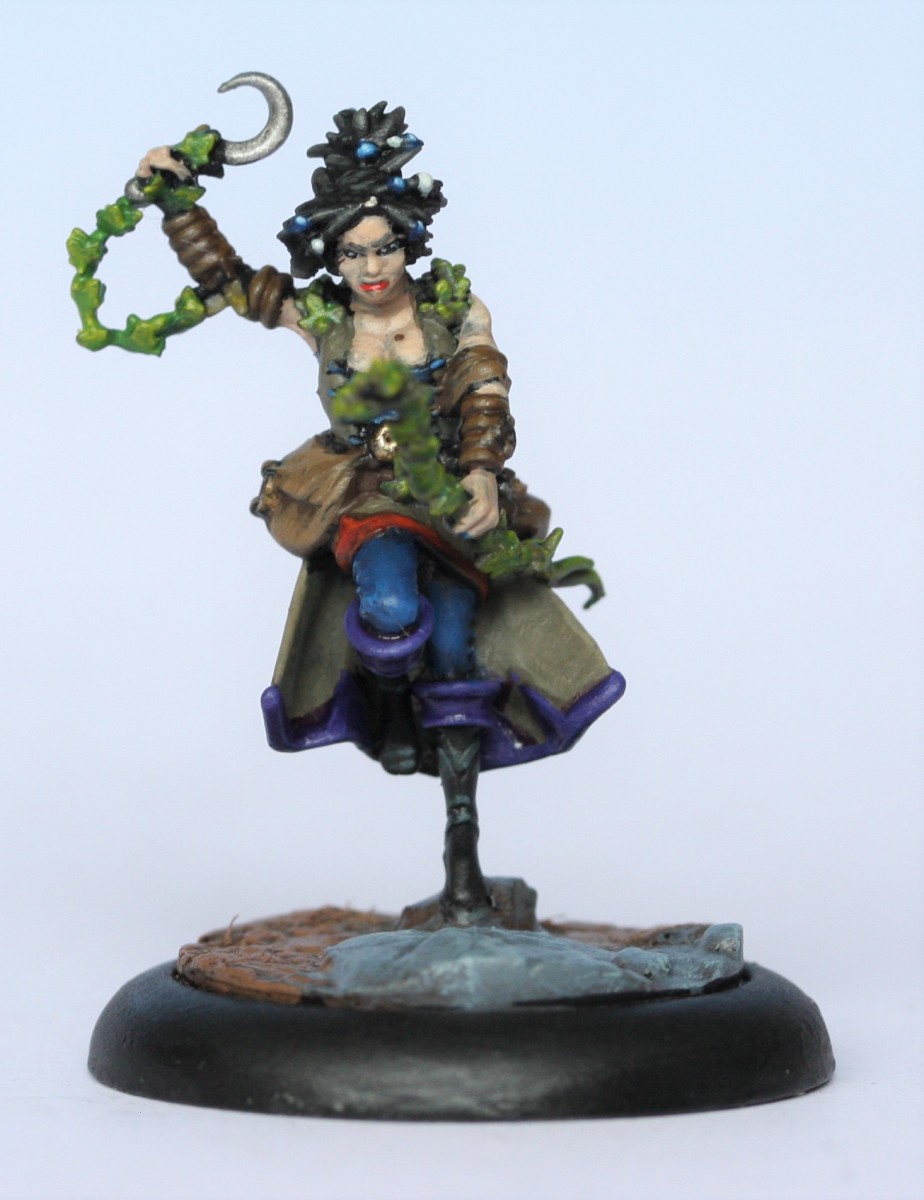 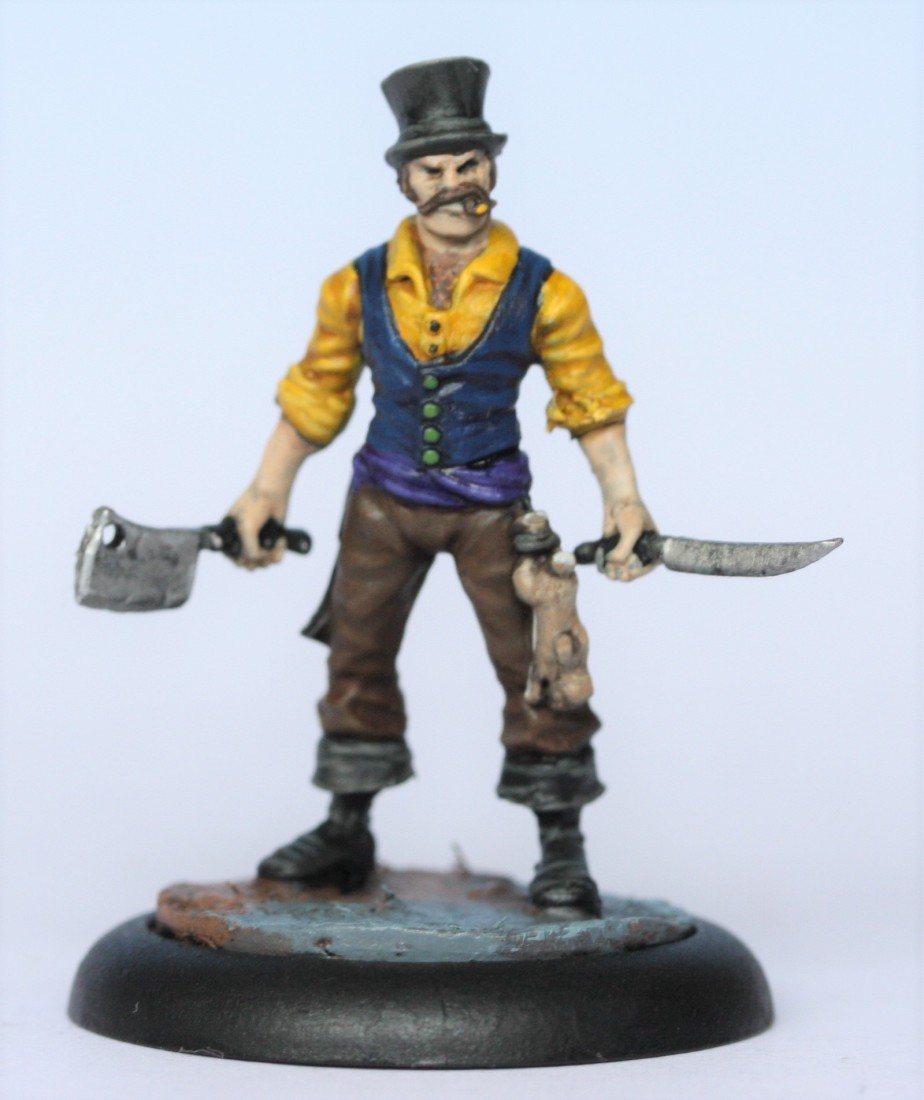 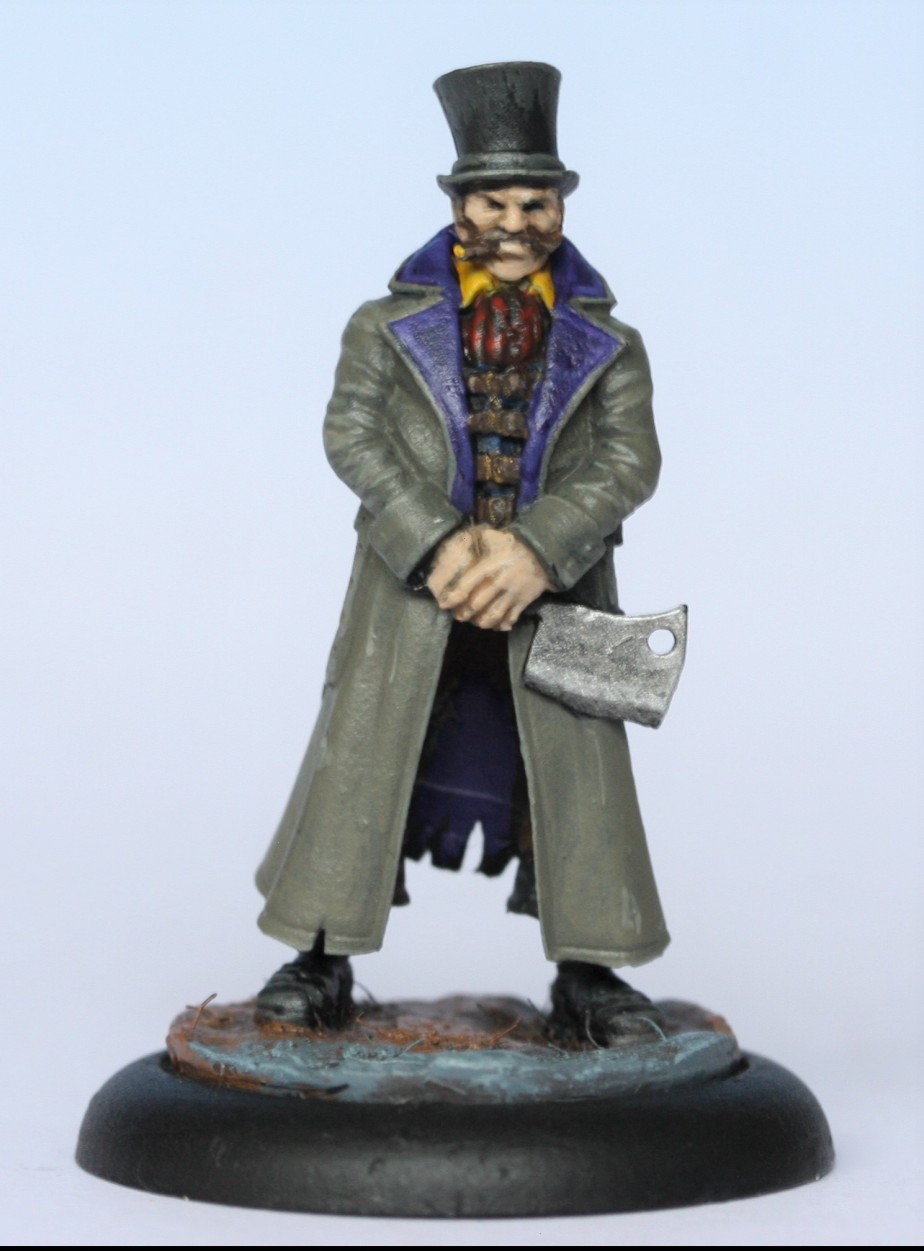 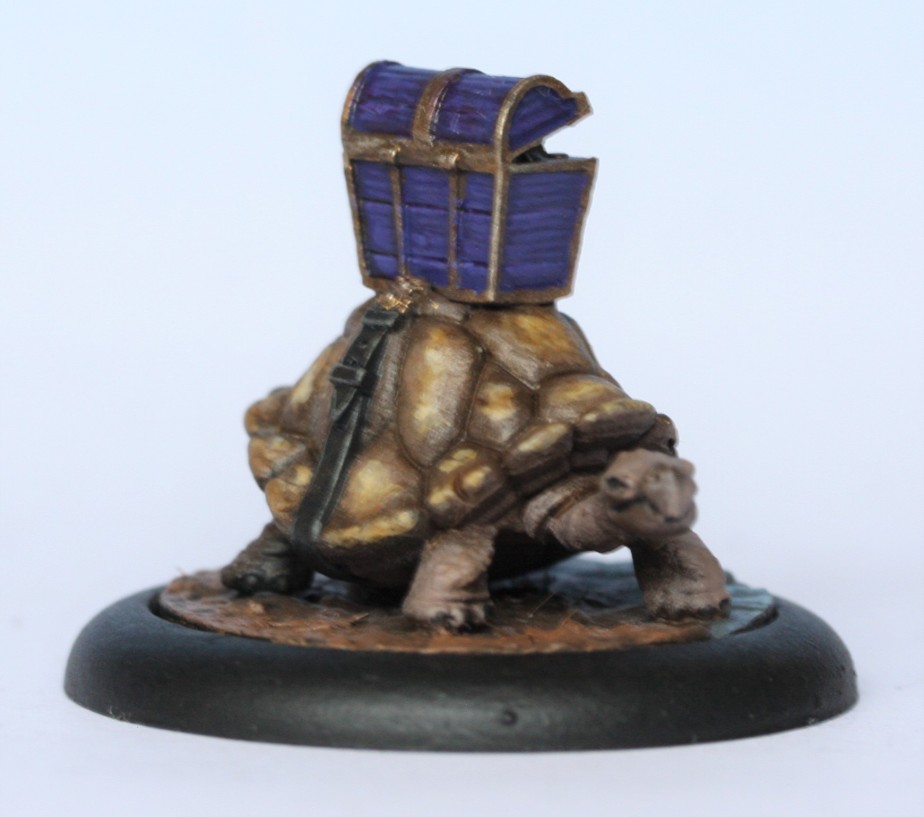 Strongbox Have I ever painted a Tortoise before? No. Am I likely to ever get to do so again? Doubtful, such is the power of Guildball!

Last, but not least got a few more Deadzone models done allowing me to field an all Pathfinder (the Enforcer’s scout equivalent) force in a small game. Featuring a Boston Dynamics style “Big Dog” toting a chunky burst laser so the scouts don’t have to.

Next up more Warmaster.

Just a couple of shots of a Goblin Bloodbowl team. 2 standalone goblins to go in the previously painted “Gouged Eye” Orc team (for the exclusive purpose of being chucked about by a troll no doubt. Then The first half of the  the Scarcrag Snivellers for goblin purists (people who don’t mind losing gloriously).

Finished the 2nd batch yesterday, but given I’m taking a week or two in France (still painting mind) I wanted to get them in the post toot sweet.

I shall be working on the 2nd half of the Guildball Union team while I’m away. Steamforged really are making some of the nicest fantasy themed metals on the market right now, more fragile than I would like, but then you can’t have everything.

Also on the (French) table will be some more Deadzone Enforcers, having obtained the “Nexus Psi” expansion recently, I’m looking to try out the elite Pathfinders themed list so a smidgen of plastic resin to remind me why I hate it and a couple of nice Mantic hard plastic, including that rather lovely D.O.G. drone model. Hope to have those finished too upoin my return. Might even cobble together a battle report for them vs VeerMyn for further play test purposes.