Fresh from this years French holiday a kitchen able being pretty much the coolest place to be sitting during the heat of the day I spent (some) of my time painting a first eBay project for a while.

I was originally going to paint the yellow ones featured recently for sale, but the process took too long for them to be a reasonable price and I decided to keep them and bought a 2nd set.

Always planned to go with a classic scheme, and the state of the set of paints I keep in France forced my hand further. Modern GW paints really are awful pot wise, with over half my GW colours being unusable after a year of idleness. Some cheapo Revell brand ones were A OK, as were some of the original GW foundation paints that have been out there a decade now.

Palette limited as I was initially (there’s no stockists within 40 minutes drive) I settled on a nice classic scheme. Goff orcs have never formally been a thing in Warhammer, but then fantasy orcs of GW’s past have always had (sometimes) rusty metal armour and a palette of brown and red for the most part with little variation. Ageof Sigmar orruks on the other hand have embraced brighter tones with vibrant painted armour. Lacking vibrant colours I had to settle for impactful contrast, so Goffs it is!

A quick black spray (with a leaky GW can from 2007 which blew back enough paint through a leaky gasket to undercoat my entire hand too) and the base armour colour was in place, which could fool the naive into thinking the job was already near done. Check patterns were next and even though orcs can be a little forgiving here, you really do need to try hard to keep the lines straight and get the corners to align precisely. Highlighting that armour is a similarly precise job, highlight lines need to be even and straight followed by a razor line highlight along all the sharp edges, given I usually fail to be neat enough with that first highlight in some places I then mix a dark grey to tidy up and straighten that first highlight line and I then go in with black into the center of all the plates. So quite involved then.

It’s at this point that you -can- fairly say these models are “almost” done. A lick of metallic weathering and chainmail, brown for the leather, some green for the skin and some red accents and they were pretty much finished. 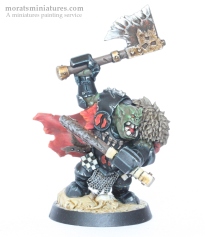 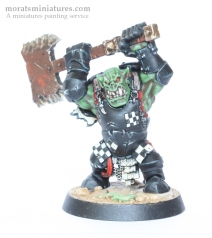 We’ll have to see if they sell, anyone interested (at the time of writing) can find them in the “Store” link at the top of the page.